This wonderful facility started as a “dream” for a group of players in 1992. This group of ordinary people set their goal to construct a Tennis Centre. The plan of action involved firstly, to acquire the land (Crown Land), then raise the money required whilst submitting a plan of the complex to Council.

Of course, none of these steps were accomplished overnight!

Fundraising filled every waking moment and with perseverance, patience and positive thinking the dream started to become a reality. $70,000 was raised through all manner of functions, fairs and frivolities. The side benefits of this fundraising, were the close friendships that were forged, with people who all had the same target in mind.

Once the Westpac loan of $140,000 (with State Government as guarantor) was secured and Byron Council allocated a $50,000 Section 93 grant, the plans were submitted to Council.

Finally after much wrangling the go ahead was given and in late 1998, the six courts were laid and in April 1999 the Clubhouse was commenced, with the official opening taking place in August 2000.

Of the course, the fundraising machine continued working as the loan payments, initially, were very substantial. As the mountain of money owed ($140,000 + $50,00 = $190,000) was gradually conquered, payments were reduced and pressure was off after 10 years of intense fundraising.

On behalf of the tennis community, our thanks…

7 Sep 1998. Celebrating the turning of the soil for the tennis court construction 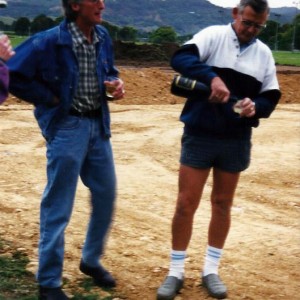 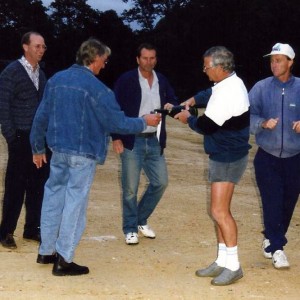 Early beginnings. Worthy of a celebration! 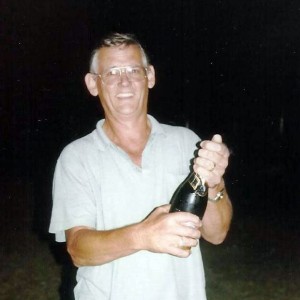 Dave Runciman - another reason to crack open a bottle